Homelessness: Are We Helping Or Hurting?

Imagine rolling over in your sleep, shivering because it’s getting colder. You’re restless, but don’t want to wake up just yet because you know it’s too early. Then, you’re jostled awake. Someone is telling you that you aren’t allowed to sleep here.

That’s the way some nights go for the 211,293 unsheltered homeless Americans sleeping where they can make do. They weren’t part of the 63 percent of America’s homeless population able to find shelter. In 2019, whether sheltered or unsheltered, 567,715 people experienced homelessness across the United States, an increase from 2018.

What’s causing the rise in homelessness?

For starters, homelessness is not always how we picture it. The U.S. Department of Housing and Urban Development (HUD) breaks homelessness into four categories which are: literal homelessness, imminent risk of losing residence, having unstable housing (i.e. moving 2+ times over a 60 day period), and fleeing domestic violence.

By these definitions, yes, ‘homeless’ means the person sleeping in a public park, but it also means the young adult that has to couch surf because they can’t afford rent. According to the Census Bureau’s weekly Household Pulse Survey, roughly 16 percent of renters surveyed were behind on rent payments for the week of Nov. 11–23. Of that group, 17 percent believe they are very likely to be evicted within two months. That’s 1,502,719 people who are spending their holiday season worried that they will lose the roof over their head.

In a housing market where you’re not just competing with other homebuyers but investors as well, it makes finding affordable housing challenging. People who have saved and saved to buy a home don’t even have a chance to make an offer when an investor can swoop in with an all cash payment to use the house as an Airbnb. According to the Joint Center for Housing Studies (JCHS) of Harvard University’s The State of the Nation’s Housing 2020 report, home prices have more than doubled between 2000 and mid-2020, up by 121 percent. The report states that even when adjusted for inflation, home prices rose by 51 percent over that period of time. It’s hard to have a stable place to live when you can’t afford it.

Lack of housing isn’t the only thing impacting the homeless population. Defensive architecture, known to some as “hostile architecture,” is popping up in public spaces around the globe. What could be seen as a moral grey area, these urban designs are built to modify behavior and prevent crime. For instance, the Camden bench, installed in 2012 by the Camden London Borough Council, was designed with crime in mind. Built to deter drug deals, skateboarders, and loitering, those that use it are pitched at an angle, so you can prop yourself against it, however it is impossible to sleep upon it.

The Camden bench is just the tip of the iceberg. Metal spikes, balls, and bars have been attached to benches and walls alike in an effort to prevent skateboarders from using them. It also makes it difficult to sit for any extended period of time. What businesses see as an architectural way to protect their business, others see as designing the homeless out of public spaces.

The homeless deserve to be treated with dignity, just like every other human walking the Earth. If shelters are full and someone has no community of friends or family to stay with, they may have no choice but to sleep in a public place. This is where organizations like VOMO Partner OurCalling in Dallas, Texas, that actively find and meet the unsheltered homeless, come into the picture.

OurCalling is a day-service organization that learns the stories and needs of the unsheltered homeless in order to give them the resources to live beyond their challenges. They connect the homeless to the services they need through partnerships with organizations like Austin Street Center and North Texas Food Bank.

OurCalling has a “search and rescue” team that scours Dallas to find the unsheltered homeless and offer them aid, or be someone to listen to their story. They also rely on help from the public to discover where need exists.

Ready to help, but don’t know how?

If you see a homeless encampment on your way to work, you can log it in the app and the OurCalling Search and Rescue team will be on their way. Do you see the same homeless person in the same spot every day? OurCalling’s app provides you with information to the nearest services to best assist that person, whether it’s a food bank, shelter, or soup kitchen.

While OurCalling can only pick up the homeless of Dallas, the app works to locate services in any city. Know a service that isn’t found on the app? You can submit services and, once verified by OurCalling, it will be added to the app in order to provide more accurate aid to the homeless.

Check Out Their Search & Rescue App

The revolutionary OurCalling app allows you to make a difference at the touch of your screen. You will have solutions in the palm of your hand to help you assist the homeless.

Make a difference through volunteering 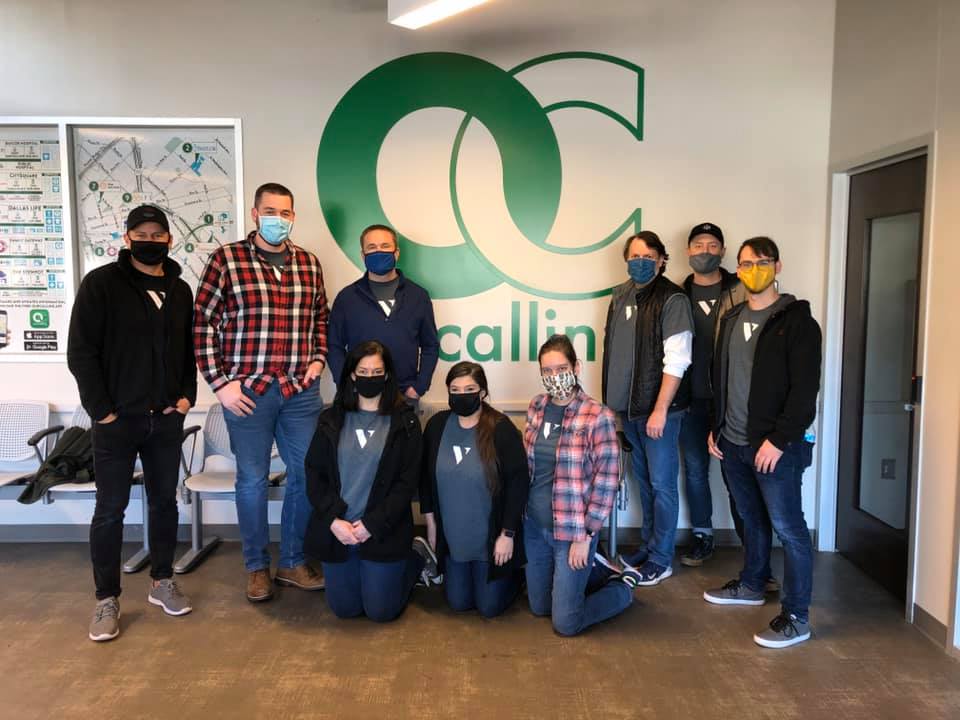 One of the easiest ways to make an impact is to volunteer with the homeless. The VOMO team learned first hand how quick, and fun, a Friday morning goes when you are part of a movement for good.

While at OurCalling, we organized donated items such as blankets, coats, and clothes that would be given to the organization’s homeless friends. Following the “Would your mother wear it?” rule, we made sure that the items were in good condition before being organized into categories. OurCalling allows guests to request specific clothing items which are picked up by a “shopper.”

Other volunteer opportunities at OurCalling include serving in the cafe, answering hotline calls, helping with laundry, and building relationships, among several others. You can volunteer as an individual, or get your friends and family together to make a difference as a group.

The next time you encounter someone who may be homeless, remember that they are a person first and are more than their circumstances. It won’t cost anything to be kind. Find volunteer opportunities to help the homeless in and around your city at https://app.vomo.org/.

It doesn't cost anything to be kind. Find opportunities to help the homeless in and around your city today.